Image credit: News Regional Media
Published May 3, 2022 10:04 am
Author Alex Dudley
Share Article
The crucial second legs in the Europa League take place this Thursday, just 24 hours after the fixture between Manchester City and Real Madrid. But, which two teams will be heading to the final of the Europa League this season? Read our previews for the two big semi-finals being staged this week below. Eintracht Frankfurt vs […]

The crucial second legs in the Europa League take place this Thursday, just 24 hours after the fixture between Manchester City and Real Madrid. But, which two teams will be heading to the final of the Europa League this season? Read our previews for the two big semi-finals being staged this week below.

Eintracht Frankfurt will believe that they have one foot in the final of the Europa League this season. The German giants were excellent in the first leg of their tie against West Ham United at the London Stadium, as they picked up a deserved 2-1 victory on the road. Ansgar Knauff scored a very early opener for the German side inside just a minute, while the important second goal was scored ten minutes into the second half by Daichi Kamada.

However, the Hammers are unlikely to go down without a fight. Michail Antonio scored their only goal at the London Stadium, while Jarrod Bowen was denied a fantastic second, as his overhead kick hit the crossbar in the final seconds.

However, Frankfurt will have the expectation on their shoulders this week, as they look to reach a first major European final since 1980. It also doesn’t help West Ham’s case that they are without a win in three previous visits to German opposition. Frankfurt look to be the pick for this fixture based on historical trends.

RB Leipzig will be looking to make the final of the Europa League an all-German affair this year. They have a slender advantage ahead of the second leg this week at Ibrox. They were made to work hard to break the resilience of the Scottish champions last week, as the winning goal was scored with just five minutes remaining by Angelinho.

The Rangers gameplan was almost played out to perfection, as they limited the German hosts to few chances at the Red Bull Arena. But, there will be pressure on them to come out an play in the second leg this week. Rangers have a poor record in home fixtures against German sides, as they are winless in their previous three. However, they did draw against Borussia Dortmund earlier in the knockout rounds.

Leipzig have made just one previous trip to play against a Scottish club, as they were beaten by Celtic in the 2018-19 Champions League season. The pressure will be on Rangers to chase the game in the second leg following their first leg defeat, and that makes it increasingly likely that Leipzig will get chances on the counter-attack. 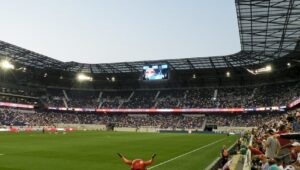