Published April 2, 2021 1:01 pm
Author Mike Johnson
Share Article
Leicester City vs. Manchester City Preview Leicester City hosts Manchester City, hoping to become one of few teams who defeated Guardiola’s machinery twice during one EPL season. You have to admit, there haven’t been too many of them. The first game was one of the biggest humiliations for the Spaniard since he sat on City’s […]

Leicester City hosts Manchester City, hoping to become one of few teams who defeated Guardiola’s machinery twice during one EPL season. You have to admit, there haven’t been too many of them. The first game was one of the biggest humiliations for the Spaniard since he sat on City’s bench, and we are more than sure that he wants to have his revenge over the Foxes. The hosts, meanwhile, have troubles with injuries, and aren’t in a good position at all.

The Foxes Without Barnes and Justin

Two of the fastest rising stars in the English Premier League and indispensable players won’t play for Leicester in this event. Harvey Barnes, a fantastic midfielder who is arguably the biggest talent in English football, and strong defender Justin, who had a breakthrough year at the center-back position. The absence of these two will be a massive blow for the hosts.

The Foxes have three straight wins, but their defense hasn’t been that great recently, with just one clean sheet in the past six games.

However, what improved the morale is a 3-1 win over Manchester United in the FA Cup. It propelled Leicester in the semis, giving them an opportunity to add one more trophy to their collection.

Sky-Blues are in excellent shape, but they have one big dilemma; whether to focus on this event or to rest the players for the Champions League game that takes place next mid-week.

The majority of City’s players had international duties, and they played two, maybe even three matches. Now they face Leicester, and after that have a clash against Borussia Dortmund in the UEFA Champions League. Really, things aren’t that easy for Guardiola.

Regarding City’s overall form, it is impeccable. Apart from the loss against United, they are perfect since the new year, smashing and bashing every opponent that stands in their way. A harsh defense is the main weapon of the future champs (yes, that is, City will win the title). In the previous three games, they haven’t allowed a single goal, while scoring seven on the other end. After a short period in which Man City’s defense was beneath the expected level, things are back to normal once again.

The first game of the year saw Leicester dismantling the Citizens at Etihad, defeating them 2-5. Jamie Vardy scored a hat-trick again, proving that he might be the best striker England had in the past 10 years. With all due respect toward Harry Kane.

City will intend to slow down the pace and the tempo, as they usually do, while on the other side, the Foxes will be ultra-defensive, especially as they don’t have Barnes in the lineup now. Rodgers is going to rely upon counter-attacks, and all of this will no doubt decrease the overall efficiency of the event. 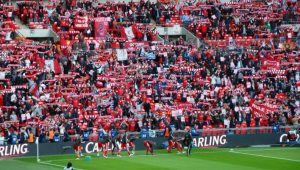 Liverpool vs. Chelsea Preview In a match that might have massive implications on the battle for the Champions League spot, Liverpool hosts Chelsea on Wednesday night. Both the Reds and the Blues are bidding for one of the top four positions, but having in mind that Manchester City probably won the title already, there will […]