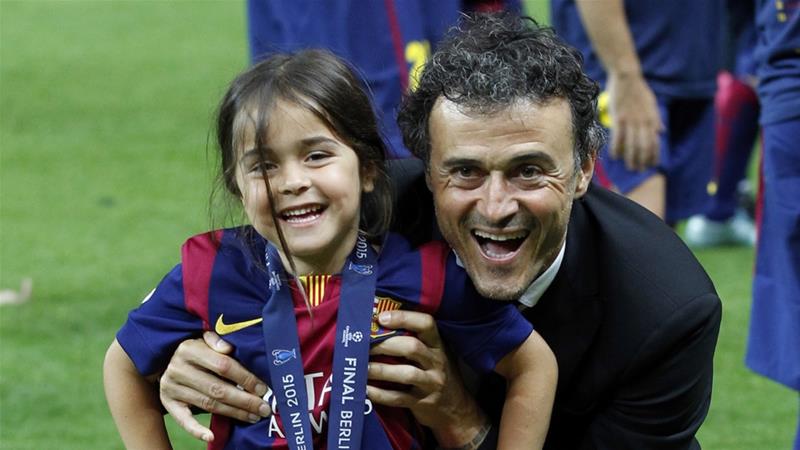 Published November 19, 2019 3:15 pm
Author Alex Dudley
Share Article
Former Barcelona manager Luis Enrique has been re-appointed as the manager of Spain. The announcement comes just five months after the Spaniard stepped down as the manager due to personal reasons. Enrique had relinquished his role in June after his nine-year-old daughter was left fighting for her life after being diagnosed with bone cancer. She […]

Former Barcelona manager Luis Enrique has been re-appointed as the manager of Spain. The announcement comes just five months after the Spaniard stepped down as the manager due to personal reasons.

Enrique had relinquished his role in June after his nine-year-old daughter was left fighting for her life after being diagnosed with bone cancer. She passed away in August, and Enrique feels now would be the best time to return to work.

The Spanish Football Federation president Luis Rubiales confirmed the announcement regarding the Champions League winner during a press conference on Tuesday afternoon.

The statement was very short, but to the point. He said: “Today we can confirm that Luis Enrique will return to his position. We have acted sincerely. We have not deceived anyone. Everyone knew that if Luis Enrique wanted to come back, he had the doors open.

“I’ve spoken to the captains and some players and explained everything to them. We have kept our promise.”

It was also revealed that the new contract would run until the end of the World Cup in 2022 in Qatar. Enrique will be hoping that he can bring success back to the country over the coming years.

The new coach previously missed the three final games of his initial tenure due to the illness of his daughter, with his long-term assistant Robert Moreno taking charge of these games.

His assistant was named as his successor, but it is unclear whether he will continue to work closely with Enrique ahead of the next cycle of European Championships and World Cup.

Moreno enjoyed an excellent tenure in charge of the team, as he won four of his six games at the helm. The most recent of those was the 5-0 success against Romania which ensured Spain’s passage to the European Championships next summer.

Moreno walked out of the stadium on Monday with heightened emotions, with neither himself or his players talking to any of the media. The 42-year-old has consistently stated that he would step down as soon as Enrique was happy to return to the fold.

However, it would seem that he will now leave the role immediately, and it is unclear whether he will return to be the assistant for Enrique. Moreno was reportedly angry with the Spanish FA as they didn’t consult him over the announcement, and when he asked following Friday’s game whether he will be in charge for the Euro’s, he wasn’t given a straight answer.

Rubiales said: “Robert Moreno told us he didn’t want to go on as soon as he found out we were evaluating Enrique’s return.

“We are very happy with Robert’s work, but the leader of this project is Luis Enrique. We’ve always said it.

“So on Monday, we received a message from Robert telling us he wanted to agree to his departure. We would have liked to have done it differently, but it wasn’t our fault.”

Spain will be hoping that Enrique can remain in the role for the foreseeable future, as they have already been forced to change managers of three occasions since Julen Lopetegui left the national side ahead of the start of the 2018 World Cup.

La Liga: Real Madrid vs. Barcelona Offshore Betting Odds and Whom to Bet On (October 16)

Real Madrid hosts Barcelona in the El Clasico derby, which takes place on Sunday afternoon at the Santiago Bernabeu. The kickoff is set for 4:15 local time in Madrid. Before Betting on Real Madrid vs. Barcelona The hosts are champions of Spanish La Liga, and look extremely confident for the moment, pushing well on all […]

Group C in the Champions League looks set to be one that goes right to the wire. The battle for the two automatic spots to reach the next round in the competition is heating up, and this fixture for Barcelona against Inter Milan is effectively a must-win match for the Spanish giants. Before Betting On […]

Barcelona could move to the top of the La Liga standings on Saturday. The Catalonian giants will need to pick up maximum points in their fixture on the road against Mallorca to achieve that. The latest odds for the huge clash in the Spanish top-flight can be found right here. Before Betting On Mallorca vs […]